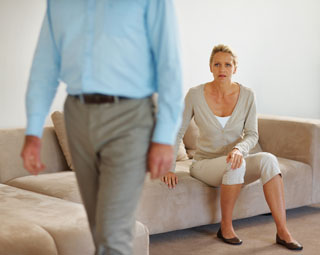 In my experience, many relationships at work and at home – maybe yours? – eventually become characterized by what could be described as an implicit contract. This contract determines how people then interact. The following is an easy guide on How To Develop A Fake Atmosphere!

Table 1: The implicit contract of many relationships

I see the behaviours listed above as warning signs that a personal relationship has gone sour. Equally, I see the same behaviours in ineffective organizations and teams.

Andy Matheson, for example, is a 46 year old operations director at a pharmaceutical company who thrives on change. Ambitious for the company to improve performance, he has a number of ideas as to how this might be achieved. Yet he voices none of them. Instead, in board meeting after board meeting, he finds himself passively watching his fellow directors playing out a game.

Today is no different. One director, Frank, is demolishing the enthusiasm and ideas of another director, Tony, by careful use of apparently unarguable logic and “facts”. Juan, another director expresses interest and support for both points of view. However, Andy knows this is nothing more than a charade. In reality, Juan seeks to prevent change in either direction so that neither Frank nor Brian “wins”. This is because should one or other win, Juan would see himself as having ‘lost’. He would, therefore, prefer to maintain the status quo even though he hates that too! So no one wins.

Andy has said very little, if anything, and now Richard, the CEO is about to close the discussion by, as usual, postponing a decision until a later date. So yet again, nothing has changed. The frustration this caused is discussed soon afterwards in dispersed huddles around the building. The overall effect is that everyone blames everyone else for the impasse.

What has happened here? Andy is rationalizing his behaviour by telling himself that nothing he can say or do will have any effect. Yet in his heart, he knows that if he were to have the courage of his convictions and raise the issues he wants to in meetings, he could count on enough support to make some changes.

All too often, whether at home or at work, we find ourselves reluctant to speak up at important times because of an intimidating atmosphere. Sometimes, this may be when we are on the receiving end of games being played. Other times it may just be when we have new ideas or points of view that we want to convey to others. But we refrain from doing so, because, rather than stick our necks out, we prefer to keep our heads below the parapet and conform to the implicit contract; don’t raise the real issues, don’t say what you mean, don’t trust each other etc.

Many of my business and relationship clients feel misunderstood, undervalued or frustrated with the behaviour of their colleagues or partners, yet admit to sitting in the lounge, at the dinner table, in meetings, appraisal, selection interviews, one-to-ones and not saying what’s on their minds only to regret it later. Not only is this debilitating to the person, who is unable to be themselves, but the equal tragedy is also that the organisation and the family are losing half the person!

Our inauthenticity is most obvious when we want to say what we think, be who we are or do what we want and stop ourselves because we know that the people around us won’t like it. We instead prefer to avoid the inevitable flak and conflict. So the truth is never on the table. And if the truth is never on the table, you are not discussing or resolving the real problems. As James Baldwin puts it:

You need to learn how to be yourself and say what you really think even when you anticipate that the people around you don’t want to hear it. Even when it is uncomfortable, you stick to the courage of your convictions and don’t compromise over what’s really important to you.